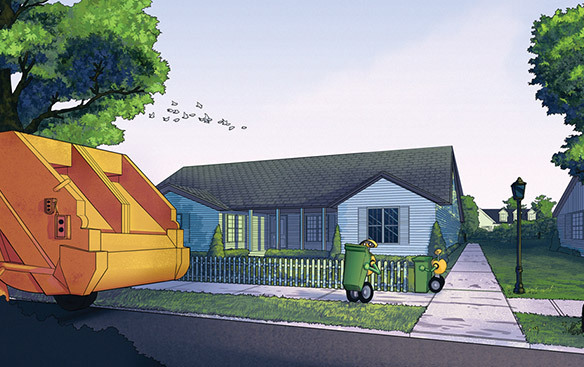 In the classic episode of The Simpsons where Homer Simpson ran for the sanitation office of Springfield, he ran on a pie-in-the-sky campaign promise of "Can't someone else do it?" when it came to waste collection duties. In 2015, Volvo Group working in cooperation with students from Chalmers University of Technology and Mälardalen University in Sweden as well as American Penn State University could change the topic to "Can't something else do it?" through the development of trash-collecting robot technology.

In a group effort to reduce the strain and noise related to garbage collection, robotic and autonomous principles are being engaged in the creation of a project called ROAR. ROAR (Robot-based Autonomous Refuse handling) is conceived as an extension of the garbage collection truck. The robot unit will be ample to collect and empty containers of waste into the garbage truck in the same labour-intensive procedure performed by human collectors. The ROAR system will relieve refuse collectors of the heavy workloads but will not take the human element of the equation. The robot or robots will operate under the supervision of a truck driver will ultimately instruct the technology.

Currently exiting the conceptual stage on-route to the development stage, a test vehicle integrating ROAR technology is planned for completion by June of 2016. Waste recycling company Renova will develop the vehicle while the three universities have divided construction of the ROAR project into separate responsibilities. An operating system will be created by Chalmers University while Penn State's Thomas D. Larson Pennsylvania Transportation Institute will be in charge of designing graphics, communication technology and the control panel inside the garbage collection vehicle. The basic design for the robot is entrusted to Mälardalen University. Project leader of the largely student driven development Mikael Ekström says, "It is exciting that we are combining advanced research with our training in robotics."

With focus on the completion of the ROAR project, autonomous technology and programming coming together in this application could prove important in the fostering of smart equipment in performing a wider array of duties. Project leader for the Volvo Group Per-Lage Götvall comments, "Within Volvo Group we foresee a future with more automation, this project provides a way to stretch the imagination and test new concepts to shape transport solutions for tomorrow."